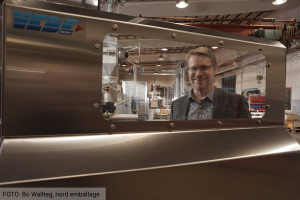 The pandemic has posed major challenges for the packaging industry. But the effects have not been very noticeable – not yet.
– But now we really need a trade fair to meet new customers, says Mats Lindgren, CEO of 100-year-old Vebe Teknik, the world leader in bag filling systems and a longstanding exhibitor at Scanpack.

When the company was started in Småland’s Björköby, outside Vetlanda, in 1921, electrification was – just like today! – the new buzzword in Swedish industry.

The founder Vilhelm Bäckman had been to the USA and was inspired. His business idea was to modernise and equip the flour mills of that time, which were driven directly by wind or water, for the new age of electric power.

100 years later, the company, now owned by the investment company Karnell, remains in the same place.

Milling equipment and millstones are no longer manufactured from concrete, nor is the equipment for handling the powders and granules that they switched to in the 1970s. But there is still a common thread from past to the present.

– Flour that had been milled needed to be taken care of, so they also made sack fillers. It was a side activity at the time. Today, our entire business is focused on sacks and sack-filling for all types of products and industries, says Mats Lindgren.

– In 2009, we decided to invest only in bag filling. This meant that 80 per cent of our sales disappeared, but we felt that this was the future. It was a make-or-break decision.

We made it! The business expanded rapidly, especially since the new generation Easy Clean was introduced in 2017. The Autopac EC solution is based on keeping machinery and filling chambers separate, which means that the chamber can be easily cleaned while machine parts are protected against dust.

– For us, it was crucial to be able to respond to the very highest hygiene standards. Not least on the food side, says Mats.

Today, the highly hygienic fully automated bag filler is completely dominant in the market. And not just the Nordic market. The company has made significant inroads in countries such as Australia, South Korea, Russia and Turkey.

– It is primarily through international trade fairs, not least Scanpack, that we have found channels around the world. The trade fairs have played a crucial role, says Mats Lindgren.

– We have seen a clear pattern: the year we exhibit, many contacts are signed, but we see no impact on sales. The effect is seen the following year, when we step up to a new level.

The pandemic temporarily halted that strategy.

– We have still done well. The food industry, which is especially important to us, and several other manufacturing industries have done fantastically well during the pandemic. So the projects we initiated have continued.

He believes that the situation is the same with many companies in the packaging industry.

– But since we have basically not been able to travel during this period, we have had to rely on digital contacts. It has worked well. But if the restrictions are long-lasting, there is of course a risk that we will be unable to reach out in the same way.

In conversations with industry colleagues, he notices that many have similar challenges.

– In order to develop further and meet new customers, we rely on the fairs starting up again. The need for automation, new machines, smart packaging and sustainable solutions has not changed, Mats states.

Another challenge, he says, is the growing need for skills.

Partly for service technicians, but also through interaction and collaboration with innovators, designers, consultants, specialists of all kinds – that is, the people and companies who usually gather at a physical trade fair.

He is therefore hoping for a large turnout at the next Scanpack.

– It will be a very important meeting place. We have high expectations for the fair in 2022 – and especially for the financial year 2023, when we should be able to see the real effects based on previous outcomes.

You need to be signed in to add to your favorites.

You can now login.

Mail has been sent.

Check your email for the reset password link. It can take up to 30 minutes before you receive the email.

You can now begin to favorise.

The browser you are using is outdated. Update your browser

We use cookies to enhance your experience of our website, to monitor the use of our website and to support the marketing of our products and services.
I understand